The gift of Rebecca Anderton, St Anne’s Church was completed and consecrated in 1874 on a site provided by W F Taylor of Moseley Hall, as a daughter church of St Mary’s. The parish was formed shortly afterwards and the boundaries were extended in 1968 to include parts of Balsall Heath and Cannon Hill.

The church was designed by the architect Frederick Preedy, and is built mainly of stone in a basic Gothic style. The nave has a clerestorey and side aisles; the NW tower is surmounted by a spire. Only one of the bells dates from 1874: the other three, which formerly hung in St Mary’s Church, were cast in the seventeenth and eighteenth centuries. A choir vestry was added to the SE of the chancel in 1898. A baptistery was built at the west end on 1923. In the same year the parish hall was built behind the church.

When the church was severely damaged by an air raid in 1940 and rendered unusable, services were held in the hall. The church was restored and reconsecrated in 1948. Since none of the glass survived the bombing, three new stained glass windows were installed.

Please click here to see a copy of the order of service for the "Re-Opening and Re-Consecration of the Church" by the Lord Bishop of Birmingham in 1948.

Please also click here to read the "Souvenir Booklet to Commemorate the Re-opening and Re-dedication of the Church".

The organ, built in 1908 by Brindly and Foster, was refurbished in 1948 and in more recent years has been added to and overhauled.

The bells were restored and together with an additional tenor bell, were rededicated by the Bishop of Aston on Sunday 3rd December, 2000.

A list of all the incumbents of the parish is to be seen on the north wall of the nave. You can also see it in the photo below: 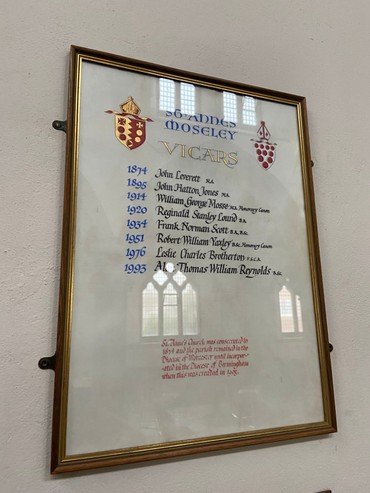